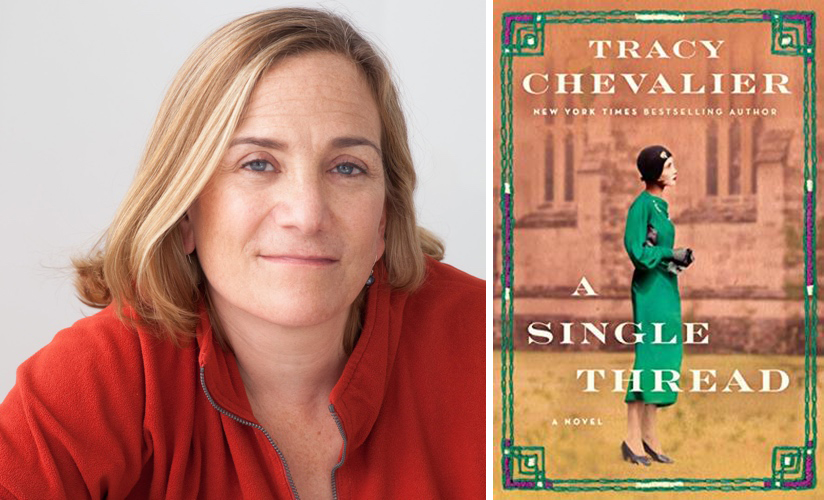 “A single thread can change everything.” This is what Violet Speedwell learns when she joins the team of broderers at Winchester Cathedral in the 1930s. Violet is one of the so-called ‘surplus women’, which was the rather unpleasant, unfeeling term used to describe the many women who found themselves out-numbering men after the Great War.

With fiances and husbands killed and so many young men gone, there were significantly more women than men and these surplus women were unlikely to marry. Violet could not bear to stay at home and look after her over-bearing, complaining mother and struck out on her own path.

I heard Tracy Chevalier talk about this book recently at the Edinburgh International Book Festival and was so interested to hear about the people the story was inspired, by including Louisa Pesel who was a real person. The amount of research which has gone into this book is evident in the attention to detail which make it such a fascinating read. As well as discovering more about embroidering kneelers and cushions (though I think it’s what we call needlepoint these days), there was also a fair amount about church bell-ringing. What came across strongly in both activities was that they were something which brought order to what had been a chaotic world – and sadly would be again soon – and that they brought people together in a supportive community.

Just as a single thread could change everything when sewing kneelers, so too can single actions change our lives dramatically. Violet’s decisions throughout the novel certainly made her life turn out quite differently than she may have expected. A quietly absorbing novel, this beautifully written book is one to take time to enjoy, just as the broderers of Winchester Cathedral took time and patience over their work.

My thanks to Becca Bryant at Harper Collins for inviting me to take part in the blogtour and for sending me a review copy of the book. It is published by Borough Press in ebook, audiobook and hardback formats and should be available to buy or order from your usual book retailer. You can order a copy online from Hive (where every purchase supports your local High Street) here: A Single Thread

From the back of the book

It is 1932, and the losses of the First World War are still keenly felt.

Violet Speedwell, mourning for both her fiancé and her brother and regarded by society as a ‘surplus woman’ unlikely to marry, resolves to escape her suffocating mother and strike out alone.

A new life awaits her in Winchester. Yes, it is one of draughty boarding-houses and sidelong glances at her naked ring finger from younger colleagues; but it is also a life gleaming with independence and opportunity. Violet falls in with the broderers, a disparate group of women charged with embroidering kneelers for the Cathedral, and is soon entwined in their lives and their secrets. As the almost unthinkable threat of a second Great War appears on the horizon Violet collects a few secrets of her own that could just change everything…

Warm, vivid and beautifully orchestrated, A Single Thread reveals one of our finest modern writers at the peak of her powers.