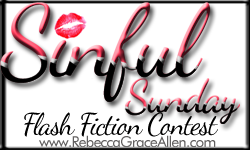 Blindfolded and cuffed to the bed, her nipples grew diamond hard and her juices flowed; not from his fumbling efforts to pleasure himself but from anticipation of watching her father’s hired muscle do to him what he was currently doing to her.

She supposed she might consider his rape of her to be a mercy fuck of sorts. It was the last mercy he’d receive in this life. She fully intended to enjoy his shameful descent into degradation. While she might not have a dick, she bet a tire iron would do the trick when her turn at him came.

He had promised her she would understand the full meaning of liberation and empowerment by the end of the night and she was only now beginning to believe how enlightened he was in such matters.

She’d never suspected by surrendering her body to the every sexual whim of another she would, at last, find a strength and a freedom never imagined before in her experience.

Every nerve ending in her body seemed to have been electrified and stimulated to the point she found it nigh impossible to focus her thoughts at all and could only surrender to an orgasmic state of total rapture.

The rough planking of the floor abraded her back and buttocks…but she didn’t care. The taut muscles of her shoulders and knees screamed in protest as they were pushed beyond the borders of pain to an unexplored land of pleasure…but she didn’t care. His thick invasive fingers plunged in and out of her, fingernails scratching against her inner walls leaving a burning ache behind and yet…she didn’t care.

Her only desire was to please him sufficiently that he would continue his thorough, unrelenting, merciless exploitation of her body until she surrendered to unconsciousness from sheer sexual overload. 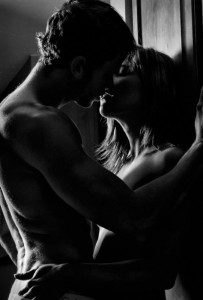 She ground her hips back as he thrust into her with increasing vigor. She was so wet her juices flowed uncontrollably down her legs leaving a wet patch on the carpet she didn’t even care how she would clean up. Thinking wasn’t a high priority as she surrendered to the raw animal strength of the man.

Hands braced against the large picture window of her Manhattan loft, she knew her naked form was readily visible, feeding the voyeuristic appetites of an untold number of faceless watchers.

Any initial reluctance she’d felt about doing something so unaccountably naughty was swept away as her first climax overtook her. Let them watch, she purred; let them see a hot woman getting the hell banged out of her. As long as the orgasms kept coming she really couldn’t care less who else was aroused. 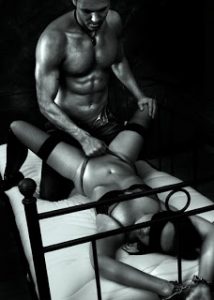 Rosaria writhed in carnal sensory overload riding the wave of ever more powerful orgasms washing over her. This was the ticket! She’d needed this all week long and she wasn’t going to stop until she either passed out or the sun came up.

She couldn’t even remember the name of the guy who was currently slamming the beejezus out of her taut young butt. Oh well. Not like she was planning to add him to her Christmas card list. He was hard, he was thick and he was enthusiastic. That took care of the social amenities to her.

All conscious thought left her mind as the harsh kiss of the cuffs abraded her wrists and her stud chose that moment to grab a handful of her raven hair for balance. Rocking back and forth with increasing intensity, she felt the liquid gush of his release as he exploded deep inside of her.

He’d barely slid from her depths when she snapped over her shoulder, “Nice ride, caballero. Send the next one in on your way out.”

She slid onto her belly, humming a chorus of “What’s Love Got To Do With It?”, as she waited for her next sexual assailant. 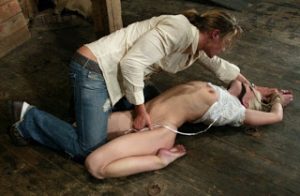 Simon pressed his lean, hard-muscled body against her, letting the wiry hair of his chest brush her nipples to arousal. He trailed butterfly kisses down her neck and nipped lightly at the hollow of her throat before trailing his way down to her breasts. Oh, this was truly a lamb to be led with care, he mused.

He’d been currying favor with this submissive creature for weeks and tonight he would reap his rewards at last. Before he’d finished with her he’d not only have expanded her sexual horizons but the holding capacity of every orifice his hardened member could plunder. How delightfully naïve she was. 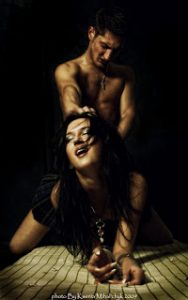 A waitress at the shop where he sometimes stopped for coffee, he’d cultivated her interest slowly and seductively. He knew all of the right buttons to push to play a woman such as her from titillation, to anticipation, to gratification (his primarily).

He soothed and cooed to her as he tightened the restraints. Before she could query him again as to how the safe word worked, he’d already fitted the ball gag to her succulent mouth. He always found the frantic, disbelieving look as their eyes shot wide open to be the ultimate aphrodisiac.