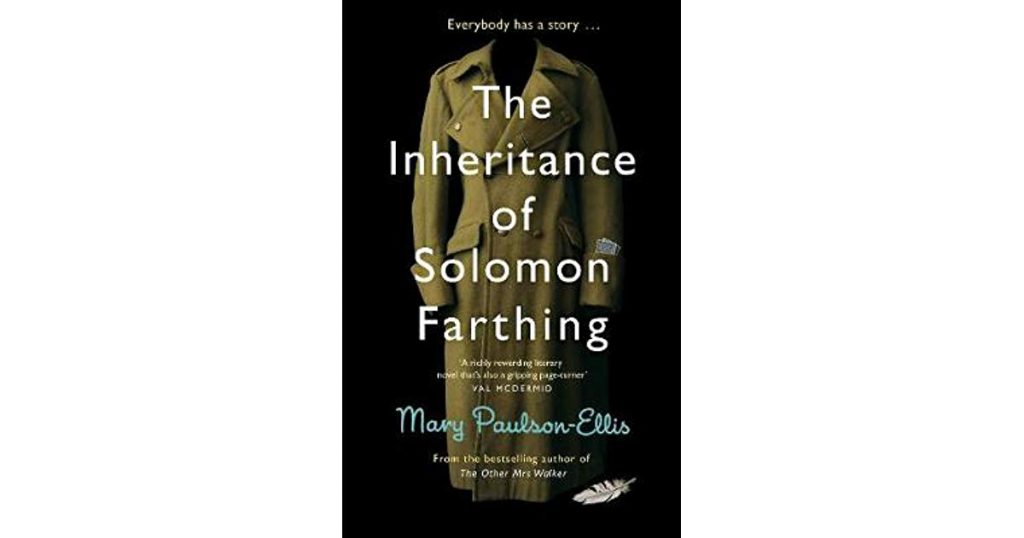 I really enjoyed The Other Mrs Walker by Mary Paulson Ellis and was delighted to get the chance to read her new novel which is due to be published tomorrow (5th September). I think I enjoyed The Inheritance of Solomon Farthing even more.

Solomon Farthing is an heir hunter, someone who tries to find distant or estranged relatives of deceased people in order that they can inherit. And, of course, get a cut of that inheritance himself as a fee. When Thomas Methven passes away with no apparent heirs and with £50,000 sewn into his burial suit, Solomon has his work cut out for him. All he has to go on is a very old pawn ticket found among the old man’s belongings. Solomon was brought up by his grandfather, Godfrey, who had a pawn shop and there the first of the connections began.

Because for me this book was all about connections. Connections to the past, connections to people, even connections to The Other Mrs Walker. Margaret Penny from that book gets a few mentions and makes an appearance, though is usually referred to in a disparaging way as that dreadful Penny woman! Thomas Methven has links to a group of soldiers in the 1st World War and so does Godfrey’s grandfather. Solomon at one point muses that “Everyone was connected, one way or another, that was what he thought. “

There were so many echoes of the past linking with the present throughout the novel from phrases such as “his second best shirt”, to the items that the soldiers used for gambling resurfacing at significant points: a centime, a tanner, a spool of pink cotton, a walnut shell, a cap badge. As Solomon investigates Methven’s family tree he slowly begins the unpacking of the mystery and uncovers “a line that ran parallel to Solomon’s own, connected by blood at the top, divided by secrets at the bottom.” Fleshing out the story, we also hear from Godfrey Farthing’s men in the last days of WW1 and then at various points in between then and the present day.

This was a book which appealed to me on so many levels. New Register House in Edinburgh, where Solomon carries out some of his genealogical research is a place I’m familiar with having researched my own family tree there. I recognise the thrill of discovery – “this was what he liked most about his profession – that moment when the dead waited for the living to wake them, bring them home again” – or the frustration of not being able to track someone down in the records. At least two of my great uncles served in WW1 in the Royal Scots which is the regiment Godfrey Farthing and others are part of. I very much enjoyed the parts of the book set in Edinburgh with the descriptions not only of familiar places but also the Edinburgh Ladies and Edinburgh Men – those capitals are deliberate!

The Inheritance of Solomon Farthing is a superb story, very cleverly told. It’s a book which reminds us again of the futility of war and the repercussions affecting the soldiers and their families for years to come. Mary Paulson-Ellis writes with great insight about the way the men coped or didn’t after their experiences in the Great War. It’s a well-crafted and compelling piece of historical fiction with a fascinating mystery to be resolved. I loved following Solomon in his investigations and finding out the stories of the men during and after the Great War, even though they were sometimes sad. I highly recommend this book.

From the back of the book

Solomon knew that he had one advantage. A pawn ticket belonging to a dead man tucked into his top pocket – the only clue to the truth . . .

An old soldier dies alone in his Edinburgh nursing home. No known relatives, and no Will to enact. Just a pawn ticket found amongst his belongings, and fifty thousand pounds in used notes sewn into the lining of his burial suit . . .

Heir Hunter, Solomon Farthing – down on his luck, until, perhaps, now – is tipped off on this unexplained fortune. Armed with only the deceased’s name and the crumpled pawn ticket, he must find the dead man’s closest living relative if he is to get a cut of this much-needed cash.

But in trawling through the deceased’s family tree, Solomon uncovers a mystery that goes back to 1918 and a group of eleven soldiers abandoned in a farmhouse billet in France in the weeks leading up to the armistice.

Set between contemporary Edinburgh and the final brutal days of the First World War as the soldiers await their orders, The Inheritance of Solomon Farthing shows us how the debts of the present can never be settled unless those of the past have been paid first . . .