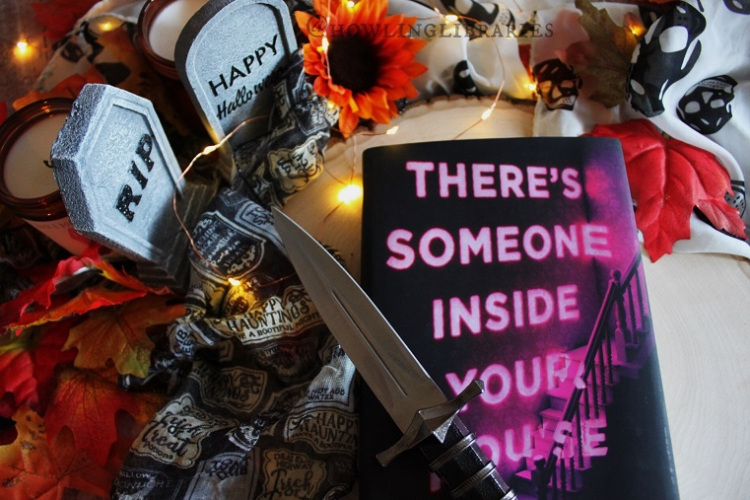 Scream meets YA in this hotly-anticipated new novel from the bestselling author of Anna and the French Kiss.

One-by-one, the students of Osborne High are dying in a series of gruesome murders, each with increasing and grotesque flair. As the terror grows closer and the hunt intensifies for the killer, the dark secrets among them must finally be confronted.

Who would have guessed that Stephanie Perkins, queen of contemporary romance, could also write absolutely terrifying horror novels?  Not me.  I won’t lie, I didn’t know what to expect with There’s Someone Inside Your House.  I picked it up solely based on the fact that Stephanie Perkins wrote it.  I have a feeling that’s what is going to attract a lot of readers to this one but that’s not a bad thing at all.  Stephanie Perkins’ writing style fits horror just as well as it did romance.  Fans of her previous books will still find many things to love about this one and new readers may just find a new author to check out.

There’s Someone Inside Your House is being marketed as Scream meets YA and it’s probably one of the most fitting marketing strategies that I’ve ever seen.  From the very first chapter, readers are thrust into small town life at Osborne High where teens are being brutally murdered.  Not only is the killer very into gory murders, he’s also a bit obsessed with taunting his victims.  I’m not gonna lie, I was on the edge of my seat with this one.  Not only could I not guess the murderer, I also couldn’t guess what they were going to do next.  Stephanie Perkins may write for YA but she didn’t shy away from the bloody, brutal, terrifying aspects of writing a horror novel.

Horror isn’t the only thing I loved about There’s Someone Inside Your House; the romance was spot on.  Yes, there is romance.  Honestly, would it be a Stephanie Perkins book without it?  Not in my mind.  I wasn’t expecting something super sappy and romantic like Anna and the French Kiss which is good because it’s totally not the same thing.  The romance was perfect for this story.  It wasn’t overdone and it didn’t overshadow the rest of the story.  It was sweet and steamy and just what I would expect from Stephanie Perkins.

The only complaint I had about this one was the ending.  Don’t worry, I’m not going to spoil anything but it was rather abrupt and the killer’s motives were a bit dumb.  I’ve seen others have this same complaint but it really didn’t detract that much from my overall enjoyment of the story.  Yes, I would have liked a more fleshed out killer with a solid motive but it wasn’t a completely unbelievable story.

Overall, There’s Someone Inside Your House is definitely a departure for Stephanie Perkins but it proves that contemporary romance is not all she can do.  If you are a total horror buff, I doubt this one will scare you all that bad but I do still recommend it as an enjoyable, quick read.  If you’re like me and afraid of your own shadow, read this one with the lights on.  Really, though, check this one out.  It’s the perfect Halloween read!