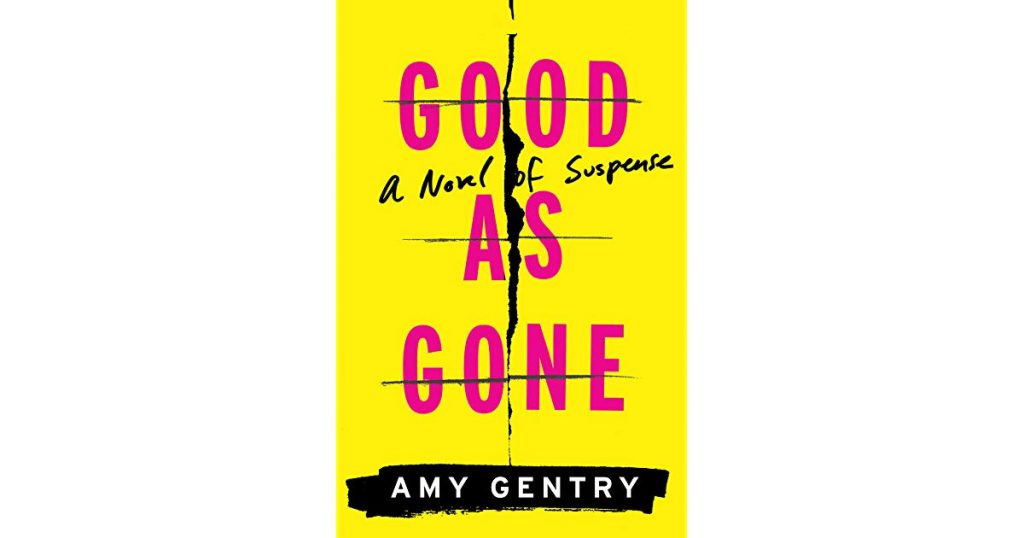 Thirteen-year-old Julie Whitaker was kidnapped from her bedroom in the middle of the night, witnessed only by her younger sister. Her family was shattered, but managed to stick together, hoping against hope that Julie is still alive. And then one night: the doorbell rings. A young woman who appears to be Julie is finally, miraculously, home safe.

The family is ecstatic—but Anna, Julie’s mother, has whispers of doubts.  She hates to face them. She cannot avoid them. When she is contacted by a former detective turned private eye, she begins a torturous search for the truth about the woman she desperately hopes is her daughter.

Readers are in for a real treat with Good As Gone.  No matter how confident you are that you’ve got this one figured out, it’ll keep you guessing.  Amy Gentry had me questioning everything until the very last chapter.  Suspense fans will adore this and devour it in as little time as possible.

A young girl, Julie Whitaker, is kidnapped from her bedroom one night when she’s 13-years-old.  8 years later, she shows up on her parents doorstep.  The story of what happened to her during those 8 years is not a pretty one.  However, it also doesn’t seem completely plausible to some.  Anna Whitaker only wants her daughter back and she’s willing to overlook some odd behavior and weird inconsistencies.  That all changes when a private investigator comes to her with information regarding Julie that she just can’t ignore.  Is the girl who showed up on her doorstep her daughter or an impostor?

I could tell from the very beginning that there was something off about Julie.  I didn’t know enough about the young girl she was before she was kidnapped to compare the behavior but she just didn’t act like a girl who was happy to be home with her family.  Admittedly, that family was quite torn up.  Julie’s disappearance and her younger sister, Jane’s, part in it all weighed heavy over all their heads during those 8 years.  It was never Jane’s fault but both she and her parents couldn’t see past that.  When Julie shows back up, she takes over everything again.  Her return brings all the problems of the Whitaker family right to the front and starts to tear them apart.

The story alternates points-of-view.  Readers get to see things from Anna’s perspective after Julie’s return and from Julie’s perspective during her missing years.  Neither of them were the most reliable narrators.  Anna is determined to get back to life as normal with Julie home but she doesn’t know what normal is anymore.  Her marriage isn’t solid, her relationship with her younger daughter is extremely strained, and add in Julie and she has no clue what she’s doing.  All she wants to do is help but she doesn’t know how.

And as things start to come to light about Julie, Anna starts to crack.  As for Julie, the timeline of her past was beyond confusing.  I admit, there were a few sections I had to read again just to make complete sense of them.  Her life was far from easy.  She had nobody in her past that wanted to help her out of the kindness of their heart.  Everyone wanted something from her.  She grew up quick and she learned many hard lessons about life and people.  Coming home didn’t make those lessons go away and it didn’t necessarily make life any easier for her.  It just made it more confusing.

Overall, Good As Gone is a solid read.  Full of twists that will leave you guessing til the end, it’s not exactly an easy read to put down.  Fair warning though, it’t not an easy read.  Julie’s past was full of dark people and horrible events.  This is definitely something I would recommend only for adult readers who don’t mind the thought of that.